You've spent months preparing for that date with destiny. The presentation that will make or break your career. You know you are ready, yet somewhere deep inside there's a voice that says you're not good enough. You don't belong. In short, there's a metaphoric post-it note on your head saying, 'FAIL'. You need to learn how to build confidence and change that voice. [caption id="attachment_31800" align="aligncenter" width="1005"] 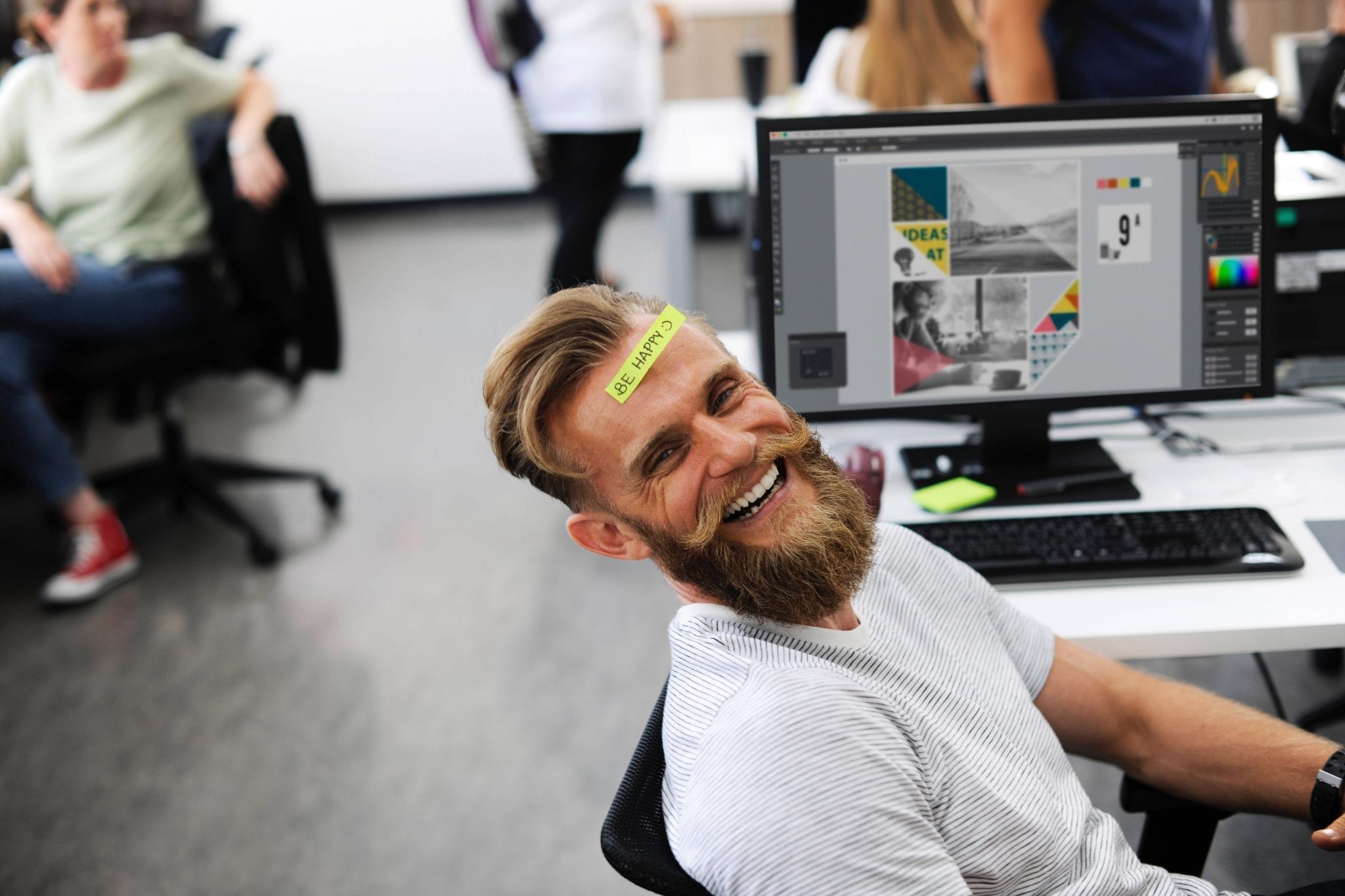 A man with great facial hair, laying back on his desk... smiling, a post-it not on his head: 'Be happy :)'[/caption] Consider, for a moment, how that impacts upon your approach, your tone, your body language and your confidence. Listen to our latest podcast to learn how to build confidence by using the 'word-on-head' influencing technique. Take back control, write your own metaphorical forehead post-it notes, and change that voice to something more positive. Change the script to 'SUCCESS'.

Read the How to Build Confidence Podcast Transcript:

"I'd like to share a sticky story with you about putting a Post-it note on your head, on your forehead. My name is Darren and you're at the home of Sticky Learning MBM, Making Business Matter, Trainers to the UK Grocery Industry. I used to work for one of the top four supermarkets in the head office. Worked there for many years, thoroughly enjoyed it. I had started as a deputy assistant cottage cheese buyer. I have reached the lofty heights of buying cottage cheese, so that was my first job. That gave me a good understanding of buying off supermarkets. I guess I was always destined to go into that role because my father worked there for 40 years. Also, my brother worked there, my uncle, it was almost the family business."

"I travelled four hours a day on the train, commute, and Tube and walk. Travelling from where we lived in Oxford into Stanford Street, London. As I've progressed through my career, various buying jobs, there was the big job that everyone looked for, the one just below the senior manager who reports to the director and they called it C6. C6 was, I guess in nowadays terms, it was a senior buyer or trading manager or a category manager. They were the sort of people who would look after the whole of fruit and you could be responsible for buying a billion pounds worth in a team of maybe 12 or more."

"I was a C5, I was looking to get my promotion and for this promotion, what the company had put in play was that you had to pass a panel. And that panel was about gathering evidence in the six months to that panel and then presenting your case for why they thought and you thought you to be worthy of a C6, this role, where there weren't that many in the business and it was a higher profile role and only the best and most successful people would go forward. So, my date was set, six months time, I think it was about November and that will make it about May, so around my birthday. I'd been busy gathering evidence from people around me asking the open question of, "What could I do better, what do I do well?"

"They were telling me some good stuff and some things I'd work on and it was important to get the things that were good that I could share with the panel in six months. And it was also important to get the what could be better so I could show that I was developing and improving. That was one of the key things that I needed to demonstrate. As well as, of course, delivering the business KPIs and metrics. I built a very large lever arch file, one of those the things, the lever arch files, and I had evidence. Projects I've done, my team were behind me, how I change, my personal development plan. I thought I'd had enough."

"Now, not everyone passes that panel and they get one more chance, one more opportunity to try it again a month later. I thought I was ready, I'd asked my boss, I'd taken him through my evidence and so I was ready for my pitch to the panel."

"I didn't get it. And there wasn't a huge reason as to why I didn't get it. There was good evidence, it just wasn't enough and I was okay with that. I hadn't majorly failed in any particular area, they just wanted a bit more convincing and give me a couple of pointers, and that was okay. The date was set for a month later. Could I go and find this, ask some people about that, get some more evidence here, prove a couple of things? Yes, of course, I could do that."

Moral of the Story

"Now here's the moral of the story. I stood outside that meeting room and I could see inside the panel of six, where I'd stood before. I had under my arm the lever arch file and I thought I was ready. I'd answered the questions that had come up in the previous panel four weeks earlier. But there was an overriding thought that was going through my head, "Last time you stood here and you went in, you failed."

Post-It Note on My Forehead

"What I didn't realise then, but I realise now by working with some very great trainers on soft skills is that I had a word running through my head. I had a word, a metaphorical Post-it note on my forehead with a word on it, and that was 'fail'. Even though I had the evidence, even though I'd spent four weeks gathering it and answering all those questions and checking in with my boss, my overriding behaviour was 'fail'.

"I'd walked in, I did that stuff really matter. Well, I know now that it does, and back then I didn't even understand that I had that word in my head. I walked in to the panel, Post-it note metaphorically on my head, the word 'fail' written on it."

"How did that affect my body language and my tone on my words? It did because I failed again. I know now what I need to put when I go into those pressured, challenging, important situations. I need to write the Post-it note for my head, I need to write the behaviour. So what would I have written on my head had I had my time again? Well, I did get an opportunity another six months later, which is a whole other story. This time I was successful, but what I would have written on my head is 'success' or 'win', building my confidence.

"And when we train with suppliers and the accountant has just talked about negotiating with buyers and we share the story of the Post-it note on your forehead and we actually get them to do it because it's a safe environment in the training room, they have subconsciously written on the head fail, battered or one guy wrote murdered, because they are all going in knowing, believing that they are going to fail, get battered, get murdered, as one guy put it. And what if we changed that language? What if we changed that program, that script that runs through them? Will it change their behaviour?"

"All the research set it, well, all I know from 16 years plus of understanding this talk and the research behind it, it absolutely works. Because for those that don't believe it, I said, "Okay, I am going to program you by talking with you for a few minutes before you go into a very challenging pressured situation. I'm going to put fail in your mind. Is that okay?" And they said, "No, no, no, you can't do that." Why? "Well, because I'll fail." Okay, so if that's true then is the opposite true? Well, it could be then. What's the downside of trying it or not? And then what we hear back later after the training, in months to come, from learners is, "Do you know that pink and fluffy stuff that some of you guys teach? Actually works," and it does."

"So my top practical tip is next time you go into something that is important, a buyer meeting, a presentation, somewhere where you might be promoted like I was, my question is what word do you have on your head? We call this influencing technique Word on Head. When you practice, maybe just between you and the meeting room around you with no one in it, when you're practising have the Post-it note with the word on your head and look in the mirror. How does that change your content, what you're going to say? Your behaviour? Do you find you're more confident? And your tone? Because those things will change according to the script that's running through your head. So next time you go in, maybe build your confidence and go in with the win Post-it note firmly stuck to your forehead. Thank you."